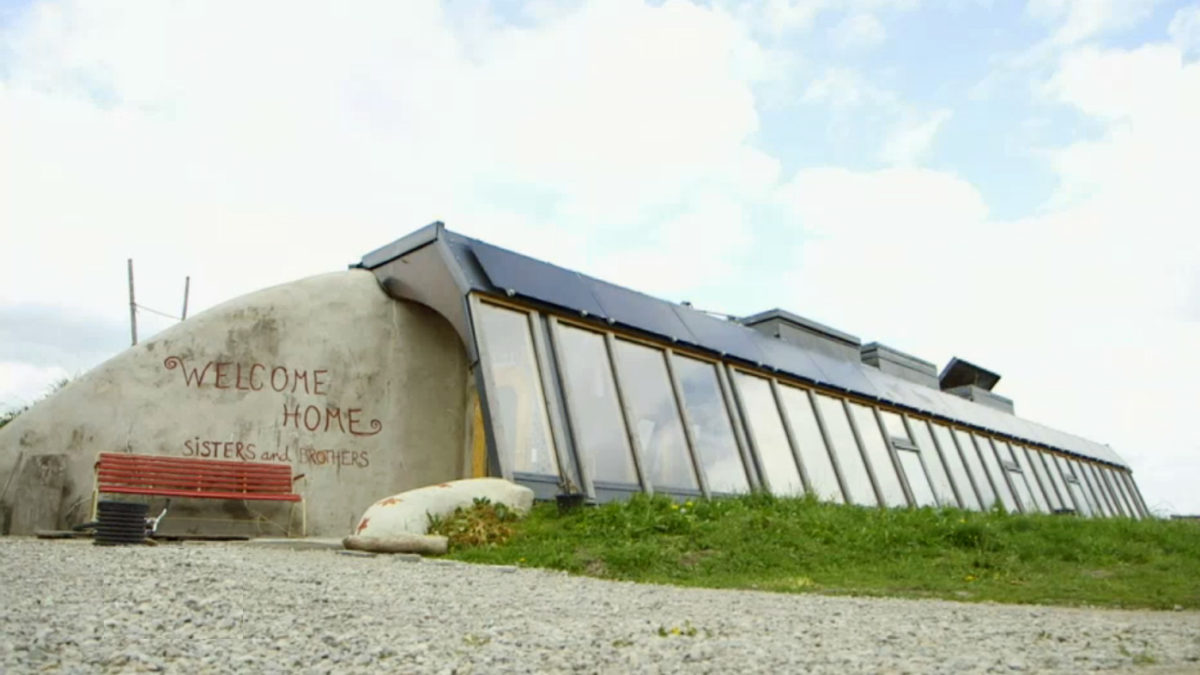 The First Earthship in Germany

About 6 years ago, a young family with three children  from Konstanz arrived with a trailer to join the community in Tempelhof. They had been living already within a bigger group and did not want to move into a separate apartment. Their dream was to experiment living in a kind of tribe or clan and raise their children  in a different way. So they lived in several constellations on the site, before the area were the Earthship is now, came into focus for a place reserved for mobile homes like trailers, yurts, module houses or tiny houses.

After some consideration the community started the experiment as a summer  project – which was watched with suspicion by the  residents of the neighbor villages because it reminded them of gypsies.

The experiment turned out a success, and so the group involved  went to the next step, thinking about adding a domestic central building with living room, big kitchen, bath rooms etc. 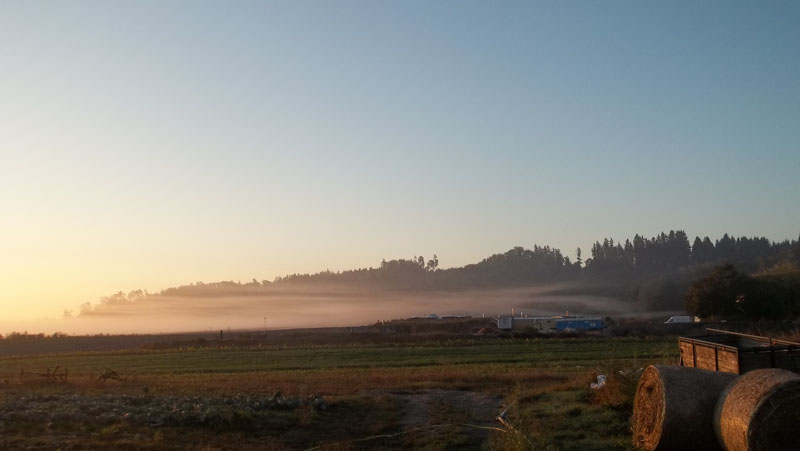 Around the same time a group in northern Germany formed, which was very enthusiastic about Earthships, like the one that were constructed by the architect Michael Reynolds with his biotecture team in New Mexico.  He is well known for the design and construction of “earthship” passive solar houses and his advocacy of “radically sustainable living”. He got famous for the reuse of unconventional building materials from waste streams, such as automobile tires, wood truss or windows from tumble down houses, glas bottles, tins and locally available building material like clay and sand.

Eventually the Earthship lovers met in Tempelhof and the two groups blended their visions into one. 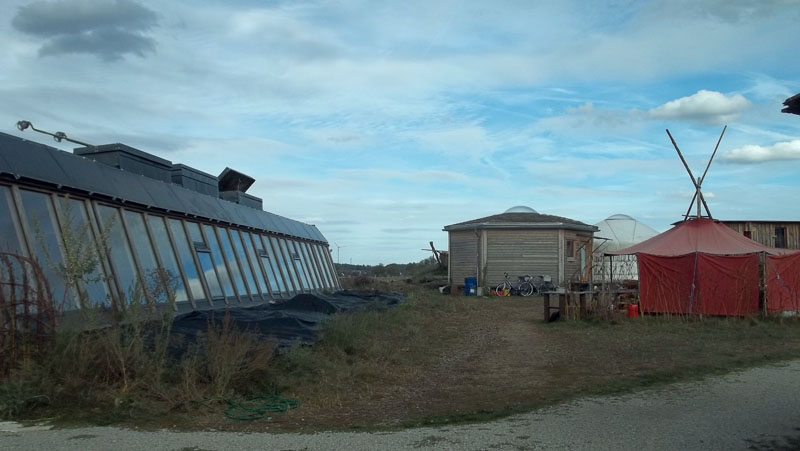 There are different models for Earthships depending on the needs of the future inhabitants and the climate. The choice was made for a version of the so called Global Model, big enough for 25 people with mobile units around, sharing their living  and functional space. 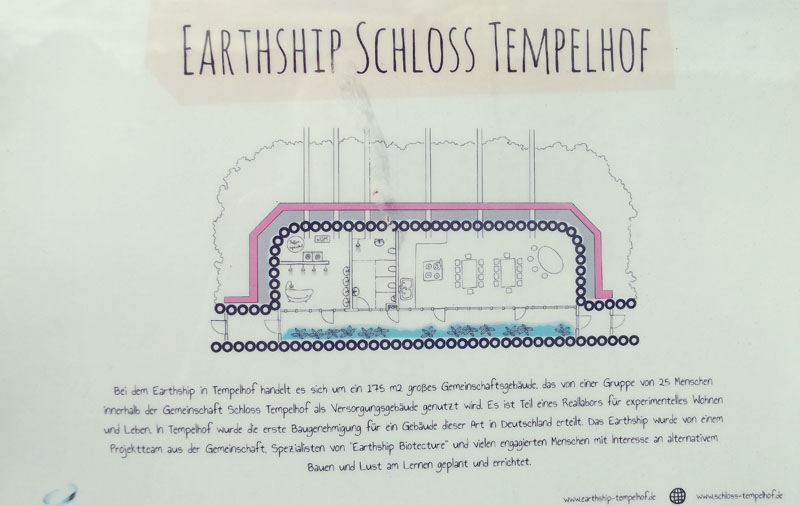 The administrative authorities, in this case the mayor and town council of Kreßberg in Hohenlohe, were very supportive and the earthship with its possible 14 appendices was declared one house with a central infrastructure: transfer station, heating and warm water.

Thus the building of the first Earthship in Germany was permitted by the municipality – even in allegedly conservative Baden-Württemberg  (Southern Germany). 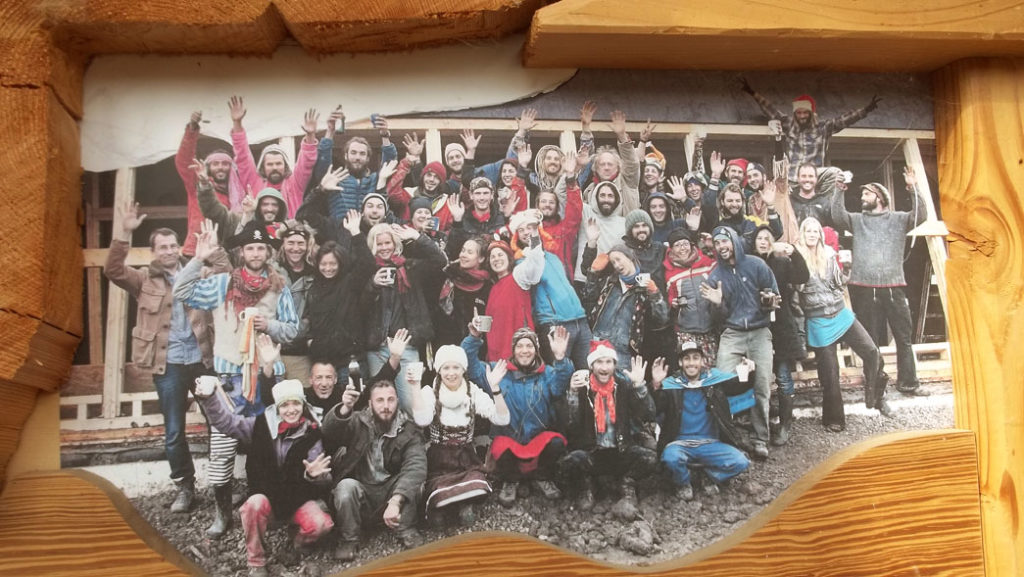 55 voluntary helpers from 17 countries started building the earthship on September 28th, 2015, after several months of fundraising for the needed money. Eventually Michael Reynolds joined in October and the building was finished in spring 2016.

Many people were involved in addition to the actual building crew to make this adventure successful:  the whole community of Tempelhof, architects, town planners, project managers, administrative authorities, helpers from all walks of life and researchers from the University in Stuttgart and the Alanus University.

You got probably curious now, and luckily there are certain dates when public visitors are allowed in. Find out the details here: www.earthship-tempelhof.de

The rooms look beautiful and homely and are well used by the residents and their friends. I personally think it is a great example how experimental building could influence how we will live in the future.

But now lets have a look inside! 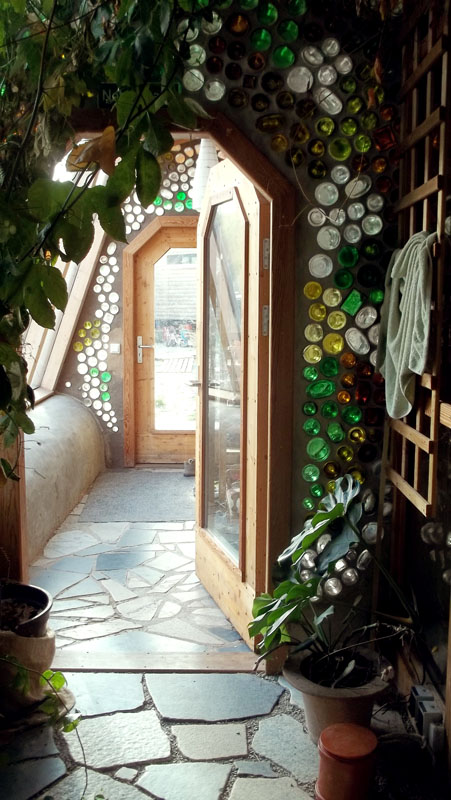 The entrance and air lock 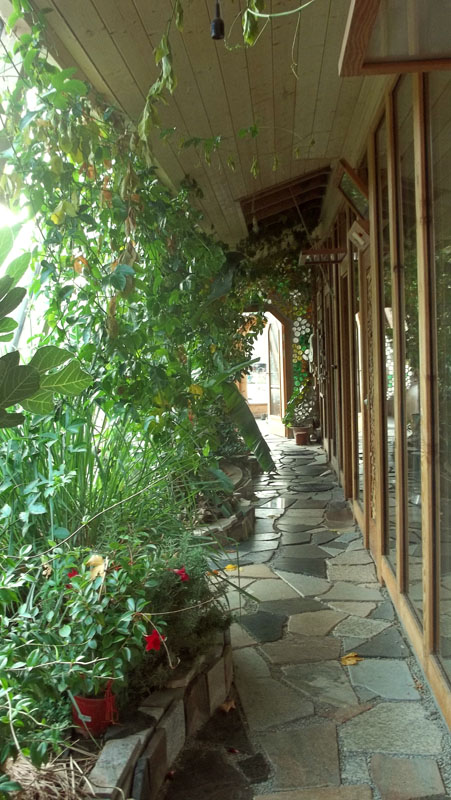 The colorful kitchen: big enough to cook with many people 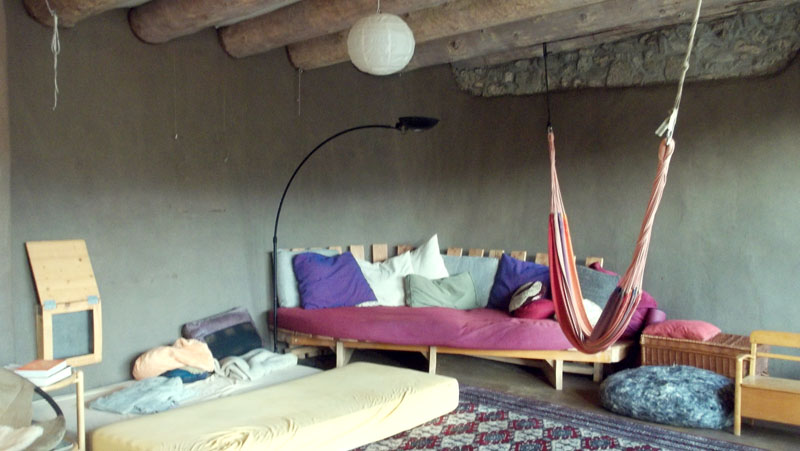 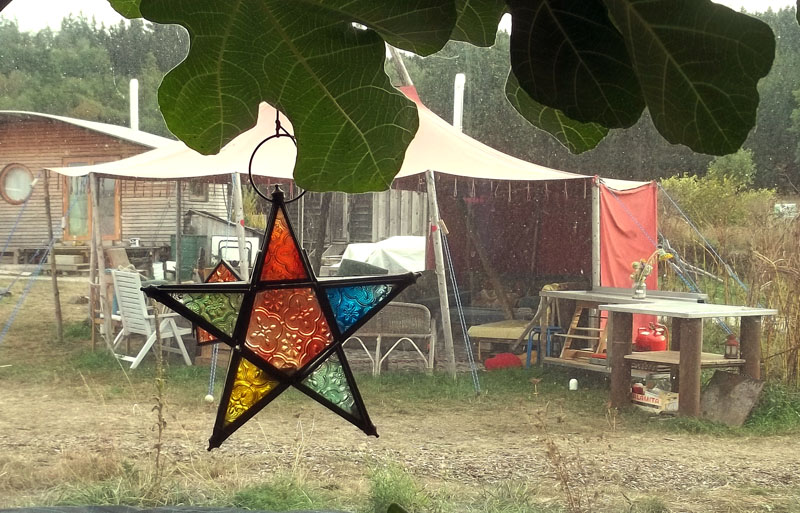 Looking outside from the green house: summer kitchen and hang out space 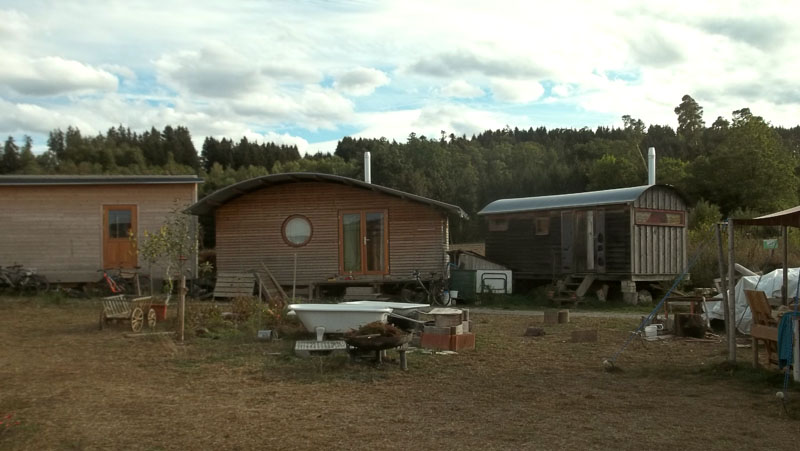 The summer bath room in the center 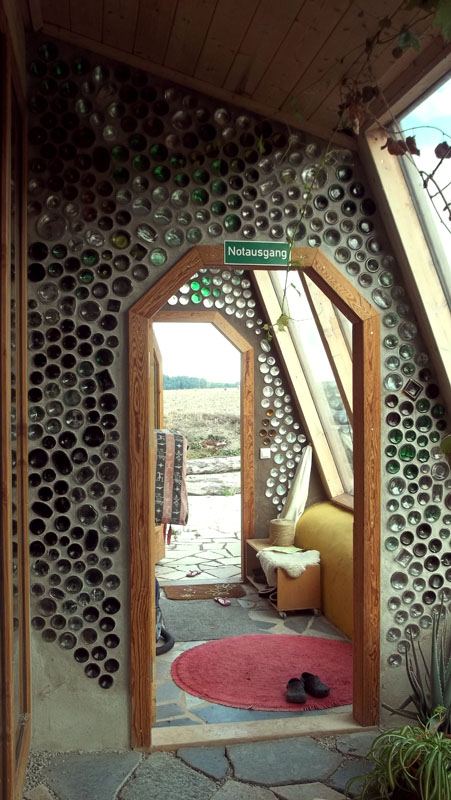 Backdoor, lookout to the fields 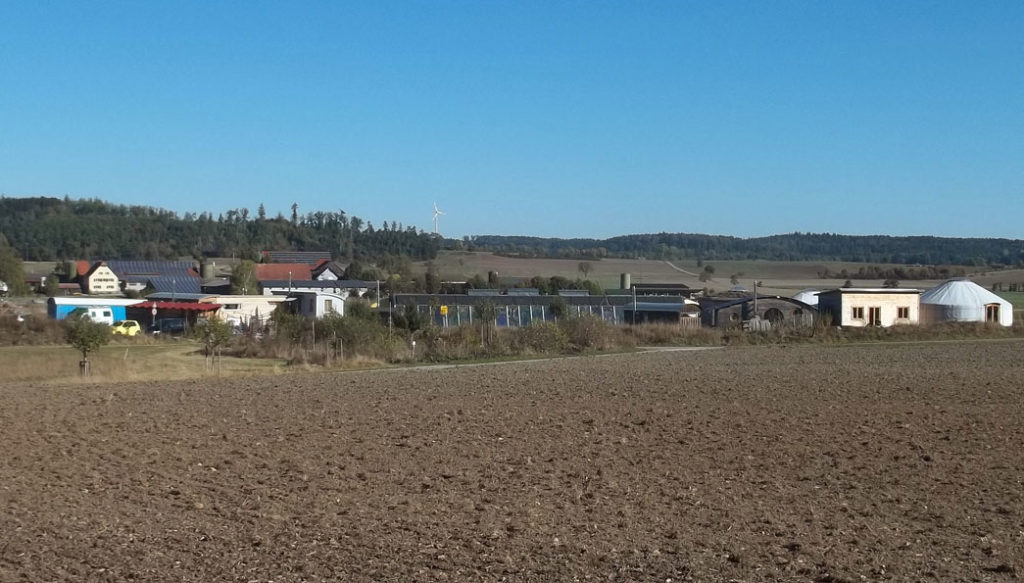 Earth ship from behind the fields

See more in a video about the Earthship in German language: