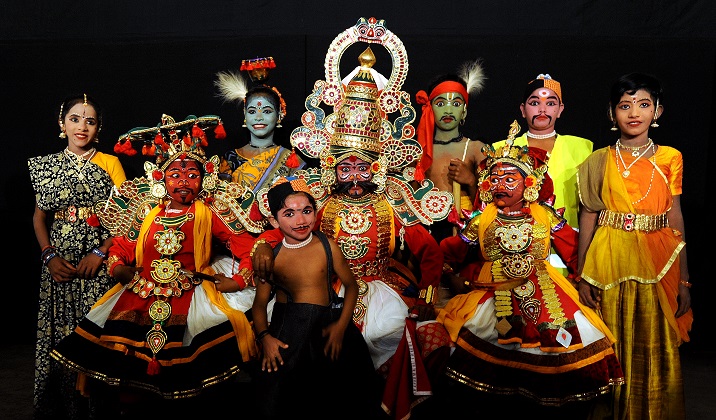 Last Tuesday I moved on from Auroville to the Kattaikuttu Gurukulam, which is a completely different realm of experience.

50 children of all ages from 7 years on, live and learn here together in several groups. Many of them stay here for 8 to 10 years. They come mostly from traditionell villages and many of their parents can`t read or write. Some of the parents are also permanently working in other parts of the country, so the school is a real home to the children.

Besides their study the kids also have many duties in the house, from early morning into the late afternoon, alternating in helping with cleaning, dishes, watering plants and also doing their own laundry. The class rooms are also their bed rooms at night, and in the late afternoon many sit in the performance and practice hall to do their homework. As a visitor you are very welcome to be present at rehearsels and classes and help with reading English texts.

Kattaikuttu is the traditional form of the rural peoples theatre in the northern districts of Tamil Nadu and a gurukula or gurukulām is a traditional type of education system, like in ancient India with students living near or with the teacher(Guru), in the same house .
I met the two founders in Berlin during my years as a manager of the IBZ.

P. Rangopal the artistic director, playwrite and master teacher of the school comes from a traditional family of Kattaikuttu performers. In the middle of the historic photograph you can see his father, next to his grandfather with the drum.

Rangopal was on stage from the age of ten, so he dreamed of giving underprivileged children the chance to become Kattaikuttu performers without missing out a on a formal education.

His Dutch wife, Dr. Hanne de Bruin, an Indiologist, founded the Kattaikuttu Sangam with him and 15 professional actors and musicians in1990.

Hanne creates new productions together with Rangopal, designs costumes and is the principle fundraiser for the project.

The new beautiful venue is situated near Kanchipuram and was inaugurated in 2006. It is a real oasis in the middle of a very sandy step- like landscape at this time of the year. Here it’s 3 to 5 degrees warmer than in Auroville but it is also much dryer, so besides around midday it’s quite nice. Not as green as the city of dawn jet, but it also exists for 13 years only – not 50.

Trees and children need to grow in their own time!

After the 8th grade the students do an internal exam, but they can go on with a program to prepare for an external exam at 12th grade, allowing them to study at a high school or university, if they are not becoming professional Kattaikuttu performers.

The school has a very god reputation so most children come by word of mouth. A fifty/fifty ratio of girls and boys would be great, but the reality shows only about 25 % to a third are female students. Girls usually need the permission of their mothers, fathers and brothers as well as their future husbands for all life decisions.

To support girls to to become professional Kattaikutta actresses, an all girls company was founded that also performed at schools and for all-women audiences, which was well accepted. The girls played female and male roles as well, traditionally men play also the female roles.

Today there is a mixed gender company: Kattaikutta Young Professional Company (KYPC) were every role can either be performed by a male or female actor

Kattaikuttu performances draw on scenes of the Mahabaratha and adapt them to the local situation, The traditional episodes are well known by the public and transformed into a source of information about local and global news, stories and problems. The performances take place at festivities in villages, start at 10pm and go on for the whole night until 6am in the morning.

The setting and framework might be different but in many parts and the function of storytelling, this kind of theatre reminds me of Commedia del Arte, the theatre of Molieres, or even early Shakespeare.