What works and what doesn’t work in an intentional community? What can the society at large learn from these collective experiments, especially those that have survived and thrived over a long time? Those are the questions at the heart of the Community Research Project, a private initiative of the German researcher Susanne Ratka.

“Over the course of my life I have lived in several intentional communities, and also in more common constellations as a single person or a part of couple in an urban setting. Many people I talk to seem to have a big longing to be embedded in a more communal life-style. I believe that many of the crises and challenges that we are faced with today cannot be solved through the same means by which they were created in the first place.”

So we have to ask ourselves how do we want to live tomorrow?

We need to rethink and question our way of living and look at brave people who have been exploring and testing new social models for many decades: in particular the intentional communities. Communities and eco-thinkers around the world are the leading edge and hope bearers of this transition movement and have a lot to say and teach us.
Until some time ago, communities understood themselves as counter-models to the cultural mainstream and encapsulated from society. Today there is more willingness in the communities to open up to society – as well as for society to interact with communities as a result of the increasing crises.

Far too little of the already existing findings and research results is publicly known and I would like to contribute with my work to bring more of it into general awareness. 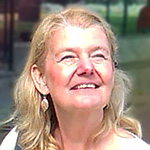 “It’s so exciting to be visiting all these communities, to talk with the people and share their life for a few weeks. What is it that they have learned about living harmoniously in an intentional community, and what can  society at large learn from their example?”